From an investor’s standpoint, finding startups that are worth the time and more importantly, the funding, often leads to a phenomenon that’s similar to olfactory fatigue (the temporary inability to distinguish an odor after prolonged exposure to it). With so many ideas floating around, investors learn to ignore the common ones. Their sensors only light up when a truly remarkable business opportunity gets into their crosshairs.

Along the way, we’ve worked both with clients that relied on prototypes to attract investors, and with startups that got their funding in other ways. We’ve had a chance to evaluate the evolution of each. On top of that, we’ve discussed with hundreds of startups that were in different stages of product development. By combining these two approaches, we’ve reached a conclusion as far as funding and prototypes are concerned.

When Ideas Simply Won’t Cut It...

The question of whether it’s possible to attract investors with nothing more than ideas pops up every so often on various online and offline channels. When someone asked this exact same thing on Quora, David S. Rose, active angel investor and CEO of Gust, provided the following answer:

'Having value' and 'Being fundable' are two completely different things. While a good idea is usually a necessary ingredient for the formation of a good company, it is not sufficient by itself for any serious investor to fund.

Why? Because there are also other good ideas out there, some of which have already been developed, tested and put into practice, thus decreasing the amount of riskExecution acts as a multiplier for ideas."

Source: Derek Sivers - Anything You Want 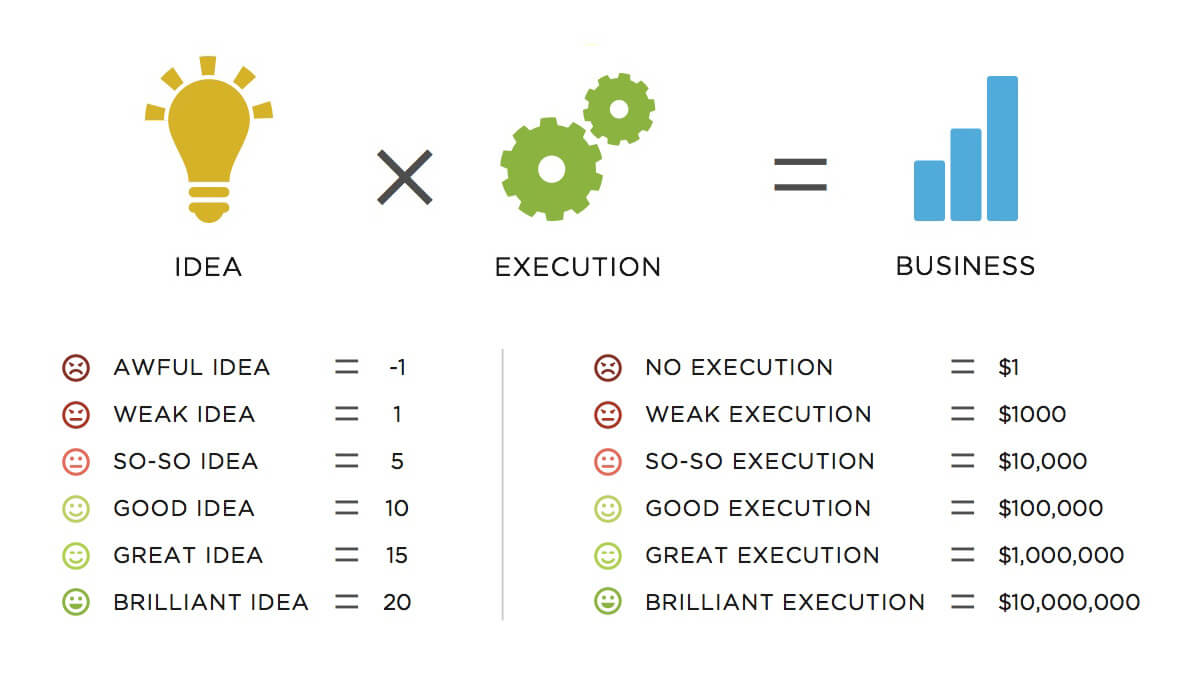 Steve Jobs also believed that ideas are worthless without proper execution. He even pointed that out in an interview from back in 1995:

You know, one of the things that really hurt Apple was after I left John Sculley got a very serious disease. It’s the disease of thinking that a really great idea is 90 percent of the work. And if you just tell all these other people “here’s this great idea,” then of course they can go off and make it happen. And the problem with that is that there’s just a tremendous amount of craftsmanship in between a great idea and a great product.

Bringing execution into play doesn’t guarantee a positive outcome, as venture capitalists might as well burn their money than invest in a well executed awful idea. However, with brilliant execution, the prospect of a large return on investment becomes more realistic. VCs get more tempted to fund a particular startup’s product. By no means does that mean that companies need to always come up with a finished product to obtain an investment, but that they need to transcend the concept phase.

...It’s Time to Get Yourself a Prototype

The first step into going beyond ideas is to make sketches and mockups of how the future product is supposed to look. However, investors often need something more palpable than that. In a business context, clickable prototypes are the equivalent of rings, which in turn symbolize commitment both in the Lord of the Rings and in officialized relationships. It turns out that marriages and investments have more in common than you would think. Prototypes signify something that’s still at the beginning, yet solid enough for great things to be built on it.

Crowdfunding vs. Traditional Funding: What Path Should You Choose?

In this context, what could ever stop you from looking for an investment there? For starters, the crowdfunding platform’s policy. Kickstarter doesn’t allow funding websites or mobile apps focused on eCommerce, business or social networking, but Diaspora is proof that the rules are not that strict. Any company whose application has been rejected can appeal once and have someone else analyze their case.

When a $4 million laser razor campaign got banned on Kickstarter a year ago, the crowdfunding platform pointed out that the company was “in violation of our rule requiring working prototypes of physical products that are offered as rewards.” That made it quite clear that projects with no functional prototype have no place on this particular platform.

For all the others, crowdfunding works great for market validation and traction. It helps get a reaction from the masses without having to fully develop and launch a product. In case the campaign is successful, the funds can be regarded as a seed round, with venture funding to follow. Crowdfunding basically helps companies become “fundable,” at which point they present a lot more interest to venture capitalists.

As far as digital products are concerned, there’s yet another catch! Only developers can run campaigns for software, so if you’re just the man with the idea, but don’t have any of the necessary skills, it’s time to look for a co-founder or a development team.

On top of that, if you’re developing a B2B digital product or a SaaS, the price asked for it might as well go over what regular crowdfunders are able to pledge. This is where traditional venture capitalists come into play.

For businesses of such proportions, there’s a special type of crowdfunding platforms. For example, AngelList introduces everyone who has passed the interview with a partner to 5 to 20 investors who can fund the business’ space and stage. Wondering if any success stories have come out this way? Uber.com is only one of them.

Looking for the Right Investors

Investors should have a broad market vision in order to figure out whether the startup’s idea fits in the actual context. If it does, what are the chances of topping the competition? Prototypes, despite being functionally deficient most of the times, are proof that the idea can be implemented in the first place, and that it can be used for gathering feedback from future customers and business partners that will help grow the business even more.

When looking for an investor, even without a prototype ready, it’s recommended to perform a mutual analysis. Developing and launching a product are time-sensitive matters, but It’s not always wise to accept the first extended hand. A knowledgeable investor is also able to act as an adviser, and the broader their market vision is, the more valuable they become to the company seeking funding.

Emotional Bonds Could Be Beneficial to the Partnership

Sivers multiplication formula could make investments look more like a mathematical thing. On top of that, there are multiple sources claiming that emotions can get in the way of smart investments. And yet, it’s essential for VCs to have an emotional reaction to your product. After all, they’re involved in its growth from an early stage. There are three types of benefits VCs can get from investing in a startup:

In this context, the first one is represented by investment returns. Expressive benefits reveal the values, taste and status of investors to themselves and the ones surrounding them. As far as emotional reactions are concerned, investments should generate pride, but they often go beyond just that.

Investors expect all of these three in return for funding, but that doesn’t mean that startups aren’t getting any benefits. With the funding they’re receiving, they can not only speed up the development of the product, but can start negotiating with vendors and distribution channels early in the game.

Want to Get Started with Your First Prototype?

As someone who has an idea on how to disrupt a certain industry, you’re probably looking to build your first prototype. You’re looking for answers on how to do it, and whether it’s possible to attract investors with it, but the spark that ignites everything from within you.

You are the one that knows best how to express your passion for an idea, so you should plant the first seed yourself. If you find it difficult to build a prototype, you are going to find it impossible to build a successful business.

Your first prototype might not come out perfect. The point is that it doesn’t have to be perfect, but you need to know what issues to fix and how, prior to showcasing it to potential investors. Finding someone to point you in the right direction shouldn’t be that difficult. Once you’re done with building the prototype and have convinced the world of its potential, the sky's the limit!

This post was written by Alex, our experienced Content Writer. To find out more about prototypes and how they can help attract investors, get in touch with us.